University of Bath, UK; Project: The Persuasiveness of Value-Based Arguments in a Brexit Context

"… during the referendum campaign, to raise the economy as a reason for staying in Europe was always likely to fall on deaf ears – and it did. Yet since 2016, remarkably, most remainers seem to feel that if they keep repeating this message, somehow people will change their minds. It won’t work." Harker (2019)

In the “Brexit referendum” of June 2016, 52% of the British electorate voted for the UK to leave the European Union and 48% voted for the UK to remain. Both in the time leading up to the referendum and in its aftermath, the media and the public have used many different arguments for or against Brexit to justify their position or to sway public opinions. Interestingly, many of these arguments appeared to be based on human values, that is, trans-situational ideals such as equality or freedom, which serve as important guiding principles in people’s lives (Rokeach, 1973; Schwartz, 1992). For instance, an argument advocating remaining in the EU was “Leaving the EU will make British companies less competitive, which will increase the prices for consumers.” (Cityam, 2016). This argument may be most related to wealth and hence power values in Schwartz’s value model (see Figure 1; 1992). In contrast, an argument that advocates leaving the EU was “Leaving the EU means that the EU can't interfere in UK laws. Hence, outside the EU, the UK can be an independent country with the freedom to determine its own course and make its own laws.”, which is most related to freedom and hence self-direction values. The broad question we aimed to answer was: Which value-based arguments are most persuasive in a Brexit context? 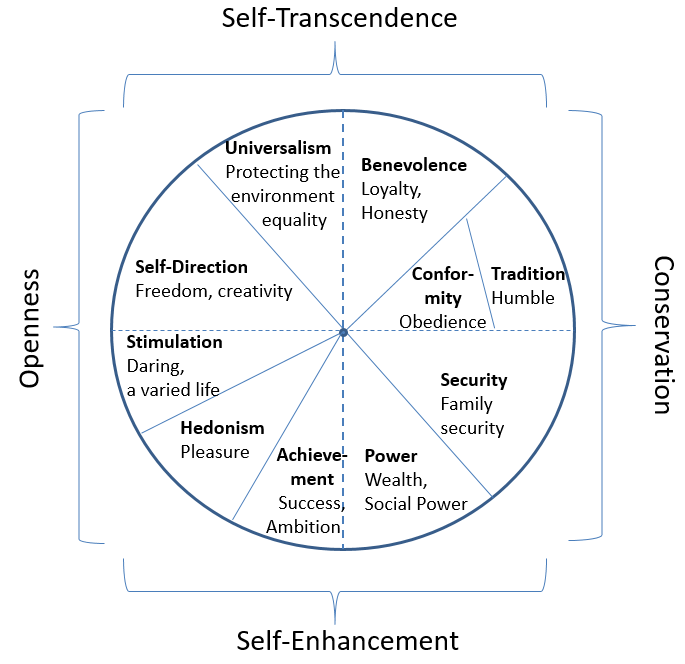 More specifically, we examined three questions about the persuasiveness of value-based arguments. First, in accordance with Harker’s (2019) quote above, it is possible that arguments are more convincing when they are based on certain values (e.g., universalism) and not others (e.g., power), and this may depend on the advocated position (Leave vs Remain). To answer this question, we created 40 arguments in favour of leaving and 40 arguments in favour of staying in the EU. The arguments were based on four Schwartz (1992) value types that are relevant to the Brexit debate: self-direction (e.g., independence from the EU), security (e.g., immigration control), universalism (e.g., tolerance towards other Europeans), and power (e.g., economy, money). We first asked participants to rate the relevance of all arguments to each of the values to examine whether the arguments were targeting the value we intended; we used only those arguments that targeted specific values and not a broad set of values.

Interestingly, conflicting predictions can be made about which combination of values would be more persuasive. The motivational compatibility hypothesis predicts that the congruent motives in compatible value-based arguments would bolster the persuasiveness of the message, whereas the opposing motives in incompatible value-based arguments would cancel each other out (e.g., Maio et al., 2009). However, the opposite effect is also plausible from an information processing perspective: Arguments from compatible values may be less persuasive because their information is more likely to be overlapping and redundant. In contrast, arguments from incompatible values may be more persuasive because they promote deeper reasoning about the arguments (Reich & Tormala, 2013), while targeting different underlying motives more comprehensively, thereby increasing the likelihood of a match to participants’ motivational basis for their attitudes (Maio & Olson, 2000). The present research aimed to tease these conflicting hypotheses apart.

For this aim, we used sets of two arguments that were rated as equally persuasive. Two arguments in a set were either based on the same value (e.g., two universalism arguments; motivationally compatible set) or on opposing values (e.g., a universalism and a power argument; motivationally incompatible set). We found weak but consistent evidence that arguments based on compatible values are judged as more persuasive than arguments based on incompatible values. However, we also found indications that the persuasiveness of these argument sets did not filter through to changing voting intentions in a hypothetical second Brexit referendum or people’s attitudes towards the EU.

Finally, as a third aim, we explored whether participants would be more or less convinced if the arguments were phrased in a gain or a loss frame. With the latter, we hoped to test whether fear-mongering (i.e., a loss frame) has an impact on the persuasiveness of the arguments. Although meta-analytic evidence suggests that a gain-vs-loss frame has little to no impact on the persuasiveness of messages (O’Keefe & Jensen, 2007), we decided to explicitly test it in the Brexit context because both the leave and remain side were accused of fear-mongering by exaggerating the negative consequences that leaving/staying in the EU would have for the UK (e.g., Bennett, 2016; Little, 2017; Shariatmadari, 2018; Toynbee, 2016). However, none of the comparisons between gain and loss frames reached statistical significance. 1

The present research provides a significant advance in the values and in the persuasion literature. To the best of our knowledge, it is the first research to evaluate the effectiveness of persuasive arguments that are based on Schwartz’s (1992) values. Given the theoretical and practical importance of values to attitudes, persuasion, and political processes (Maio, 2016), and given the dearth of theoretical foundations for why certain arguments are more persuasive than others (Areni, 2003; Hahn & Hornikx, 2016), the present research provides a theoretically-grounded approach for developing strong and weak arguments. These value-based arguments may also prove useful in a wider practical sense. For instance, messages advocating change in problematic attitudes (e.g., prejudice) or behaviours (e.g., environmentally harmful behaviours) may be more powerful when based on combinations of values that psychologically matter to people, and these messages may be particularly impactful given the universal and trans-situational nature of values.

1 Due to the large number of comparisons, we applied alpha correction methods throughout our studies to reduce the chance of type I errors.